A break from bringing this website up-to-date leaves me wandering to Sainsbury’s to do shome shopping; then a quick 15mins in The Fox garden with a lager and lime and meditating on this and that. Mortality. How short life is (cliché), sparked by a lot of recent deaths of friends’ relatives and by a rather wonderful and surprising evening, Inspiring Speakers programme run by Ginger training courses, with an end-of-course Gala evening, supporting a friend, Angie Macdonald, who talked inspirationally about ageing. Even more so, Klaus-Dieter Rossade talked about learning to love the sound of language – that is, any language, language you don’t understand, language that crowds in on you (in a pub), in a club… That particularly resonated for me, having tinnitus, and finding it increasingly hard to hear in theatres, even when wearing hearing aids. It’s the lack of comprehension in the upper tones but it’s also the way actors deliver lines today, naturalistically, mumblingly.

Which leads me on to the thought about Rosalind Franklin and my review of Anna Zeigler’s Photograph 51. It occurs to me that I’ve managed to review it without mentioning her Jewishness, or the fact that Zeigler makes so little of it, explores it so little, particularly given the period in which Franklin was around, the early 1950s and still very raw post World War II.

Why did Zeigler not explore that aspect more and why did I fail to mention it so conspicuously in my review, being half Jewish myself? It didn’t seem important to me? I couldn’t work it into the wordage? it wasn’t high on my agenda?

It says something that it wasn’t  a major priority. Others might have found it impossible to leave out. And it occurs to me that in writing, as so often in life, it’s not what is said, but precisely what is left out that speaks volumes.

The gaps in between, the silence in between. In memoriams often refer to how the recently deceased has been perceived by others; the more of them, the greater the sense of the person in the round. Much is kept from us in life. We don’t know each other that well. In death, however, much becomes clearer, the person seen in their fuller entirety. Now isn’t that an irony!

Nov 7/15 addendum: `the silence in between’ idea been obsessing me all year. Keeps turning up in different guises, I think first in Simon Stephens’ Carmen Disruption (April) but I see a reference to it I made to my friend Pam Robson in a March email. a quote from Mozart.

`the silence between the notes is as important as the notes themselves.

And a Guardian report on a conference on the last day of the World Economic Forum in Davos talking about AI and the necessity for stillness in our lives. (Guardian Sustainable Business: Jo Confino, Jan 26, 2015).

`Musician and entrepreneur Will.i.am recognised the importance of creating stillness in our lives, but said that those who were worried about the advance of technology should not forget how it would transform the lives of people in the developing world. “I love the pause, but think of those people in the developing world who have been forcefully paused and idle for a very long time,” he said.

The lead singer of The Black Eyed Peas, however, warned that society was in the perverse position where more money was being spent on developing the abilities of computers than the abilities of young people to manage technology and their lives in general. “AI learning is trumping group learning,” he said. “We are creating a whole new type of poverty, which is poverty in the mind.”

This chimes with John Havens, who is currently finishing a book on quantifying our values and ethics in regard to AI. He told me that “machines are by nature heartless and thoughtless, and yet we’re working so hard to imbue them with replacements for these parts of us that would only be reflections of these human qualities we already possess.” 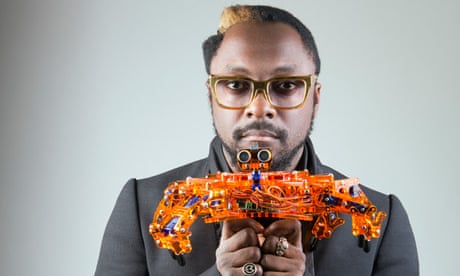 The Black Eyed Peas star and Ekocycle founder talks about waste, technology and turning the world on its head

Like Havens, Salesforce’s Benioff points to the importance of knowing what is most important about the human experience. Quoting the Zen master Thich Nhat Hanh, he told leaders in Davos to reflect on whether “you want to be number one, or you want to be happy.”