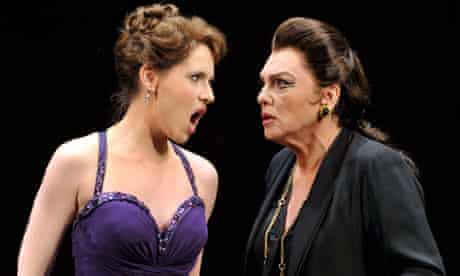 There’s something slightly lurid about Terrence McNally’s Master Class. Is it a homage or a disfiguration of Maria Callas? When it was first produced in London a decade and more ago, it struck me then as a rather odious love-hate letter to the late, great opera diva.

The wonder of this Broadway transfer revival by director Stephen Wadsworth is that he turns this strange hybrid into something moving and truthful about the art of performing and the discipline and drive that makes great performances and performers.

It’s easy to get pretentious about Art and Beauty and the prolifically versatile McNally – the author of the fine Frankie and Johnny in the Clair de Lune and librettist for the musicals Ragtime and The Full Monty – doesn’t escape it.

But Wadsworth, skilfully synchronising excerpts of Callas recordings with the actuality of young singers singing on stage succeeds beautifully in releasing moments of grandeur and drama.

And then there is Tyne Daly as the monster sacré. For any of us remembering the Cagney & Lacey cop series, it’s been a revelation to see Sharon Gless and Tyne Daly on stage in the West End. Both are an object lesson for today’s tv stars in showing the acting skills that made them such household names. Transfer them to the stage and copper bottomed stage skills are there for all to see.

Daly in dark luxurious Callas wig and black eye-liner, initially seems too Brooklyn for the firey Greek with a whip-lash tongue as she puts student singers through their paces.

It’s an unedifying sight for all that Daly and Wadsworth soften the edges of McNally’s caustic one-liners. Gradually however, humiliations give way to transcendent operatic moments thanks to Garrett Sorenson and especially Naomi O’Connell. Callas’s dictum about feeling the music was never more true than when she goads O’Connell’s young student singer into understanding the words she is singing as Lady Macbeth in the Verdi opera.

The rest – Callas’s ambition, loneliness and final isolation – is melodrama but handled by Daly with infinite depth and sensitivity.

A treat alike for opera and Tyne Daly lovers.